Element 9 Graphics recently caught up with Scottish videographer, downhiller, bmxer, and all round gnar-dog  Stuz Leel of Fresh Lab Visual… Stuz has been filming the downhill mountainbike scene in Scotland since 2010. 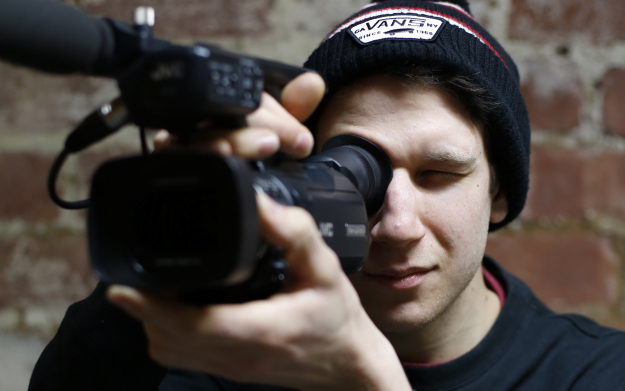 The man behind the lens

Firstly, who is Stuz Leel and what is Fresh Lab Visual?

I’m a bike rider, videographer and Brooklyn Lager enthusiast who lives in Aberdeen. Fresh Lab Visual is an online media company I set up in 2010 to document the downhill scene in Scotland.

What made you get into filming?

Growing up I watched so many bike videos and DVDs, it’s practically all I did if I wasn’t out on my own bike or at school! After a while I decided I wanted to have a go at making my own, so I bought my first Sony HandyCam and made a few short edits of my mates riding our local trails. Once I started making my own edits I began watching other videos a little differently, studying the filming and editing techniques rather than just the riding. After a few years I decided it was something I wanted to do more seriously and bought my current camera and built up my collection of equipment from there.

Alpine Bikes SDA Round 1 Pitfichie 2010 from Stuz Leel on Vimeo.

What sort of equipment do you run? How important is it to you to have good equipment?

I own a JVC GY-HM100e camera with a wide angle and fish-eye lens. Whilst I enjoy watching a lot of big budget videos I think the most important thing is to keep the video creative. So many BMX and Skateboard videos are still being made on Sony VX camcorders that can be picked up on e-bay for around £400 (none of which use stabilisers, dollies etc) and a lot of these are much more enjoyable to watch than the videos with the biggest of budgets. As long as the video is well filmed and edited, I can personally enjoy it no matter what the quality of video looks like.

Do you miss riding? I know you’re heavily into downhill and BMX – it must be frustrating visiting some good riding spots and not having a chance to ride?

As much as I enjoy film making it can be real frustrating turning up to a spot with amazing DH trails and no bike to ride them. I have to be strict on myself and not take my DH bike otherwise no filming would get done! Recently I’ve started taking my BMX to shoots so once I’m done filming I can head to a skatepark at night to get some riding in myself. 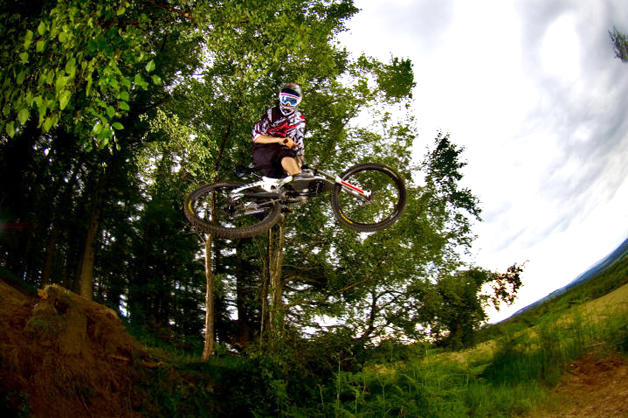 Stuz styling it up in front of the camera

You’ve mainly been filming downhill mountainbiking, with a few exceptions; will you be filming any other sports soon? BMX? Motocross?

I’m massively into BMX so would love to make a BMX edit over this year at some point. Whilst I don’t ride motocross I keep up to date with the MX sites and have been enjoying the current AMA SX season. There’s a motocross track not too far from Aberdeen so I’m definitely keen to take my camera along to a race at some point.

Where do you see filming going? Will DVDs still be sold with the amount of free video streaming online?

It seems as though DVDs are slowly becoming a niche market for many sports, especially MTB. In the VHS days you had to wait until the end of the year to see what had happened at a world Cup round, now you can watch it live as it happens. Even at more local races like the SDAs you can normally see an edit online around 1-2 days after the event, so the internet is great from that perspective. The only negative argument for the web is it can become a little over saturated with one watch edits, which almost makes them feel disposable rather than something I want to keep re-playing.

How do you decide which riders to work with for a feature edit? Do they approach you? How does it work?

Normally I ask the rider if they’d be interested in filming a part and thankfully so far everyone I’ve approached has been super keen to get something done. I’ve had a few riders approach me to film which I’m psyched on, the fact they want me to film must mean I’m doing something right! I normally film with whoever i think is fast, stylish and most importantly, a cool dude. There are so many fast Scottish riders out there I still want to film and with more and more younger guys coming onto the scene, I won’t be running short of talented riders anytime soon.

Scottish Scene Episode 3 (A Day In The Life Of Ben Cathro) from Stuz Leel on Vimeo.

Do you do any commercial work, IE filming things other than bikes?

Whilst I specialise in filming bikes I’m also available to do all sorts of commercial work from adverts to visual effects. If anyone is interested in my services I can be contacted via the Fresh Lab website contact page.

You’re a huge fan of a lot of different music, but you mostly put hip hop tunes to your work – what’s the reason for this? What do you think of 90s vids and dvds mostly using punk music?

I listen to a lot of music although hip hop is probably my favourite genre. It seems like when I first started making videos the majority of film makers were choosing dubstep or more dancey songs to edit sections to. I think using old skool/classic hip hop adds a bit of flavour, something thats a little more upbeat and refreshing to what else is out there. I grew up watching all those videos with punk soundtracks and think it fits that era perfectly. Hearing those songs now always has me reminiscing.

What’s your plans for the future of Fresh Lab Visual?

I have some new videos in the works for my Fresh Lab Mixtape series that I started at the end of last year. I’m also now a contributor for Factory Jackson and have a few new videos and articles for them in the works that I’m really excited about.

Do you have any advice for upcoming videographers out there?

I reckon watching a lot of different DVDs helped me understand what I was wanting to achieve with my own videos so I’d recommend checking out as much as you can, and not just strictly bike videos either. I’d say the best thing is to try and do your own thing and keep it creative, and remember to have fun with it!

Any thanks or shoutouts?

I’d like to say a big thanks to my girlfriend for putting up with traveling and filming commitments, my parents, brother, friends and family for their support, Olly at Factory Jackson, anybody who has watched, liked or left feedback on any of my videos, all the riders who have been a part of my previous projects and Craig at Element 9 for the opportunity to do this interview and helping out with Fresh Lab over the years.

By continuing to use the site, you agree to the use of cookies. more information